7 Wonders of the Ancient World Slideshow

The Seven Wonders of the Ancient world were first defined by the Greek historian Herodotus, and then transcribed, argued about, and edited over hundreds of years. The group of wonders presented here was popularized by Philo of Byzantium in his work "On the Seven Wonders," written in 225 B.C. 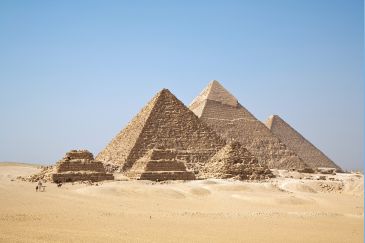 The only ancient wonder that still stands, the Pyramids of Egypt, are three pyramids at Giza, located outside modern Cairo. The largest pyramid, built by the pharaoh Khufu, a king of the fourth dynasty, had an original estimated height of 482 ft (now approximately 450 ft), which made it the tallest man-made structure in the world for over 3,800 years. The base has sides 755 ft long. It contains 2,300,000 blocks; the average weight of each is 2.5 tons. Estimated date of completion is 2680 B.C.